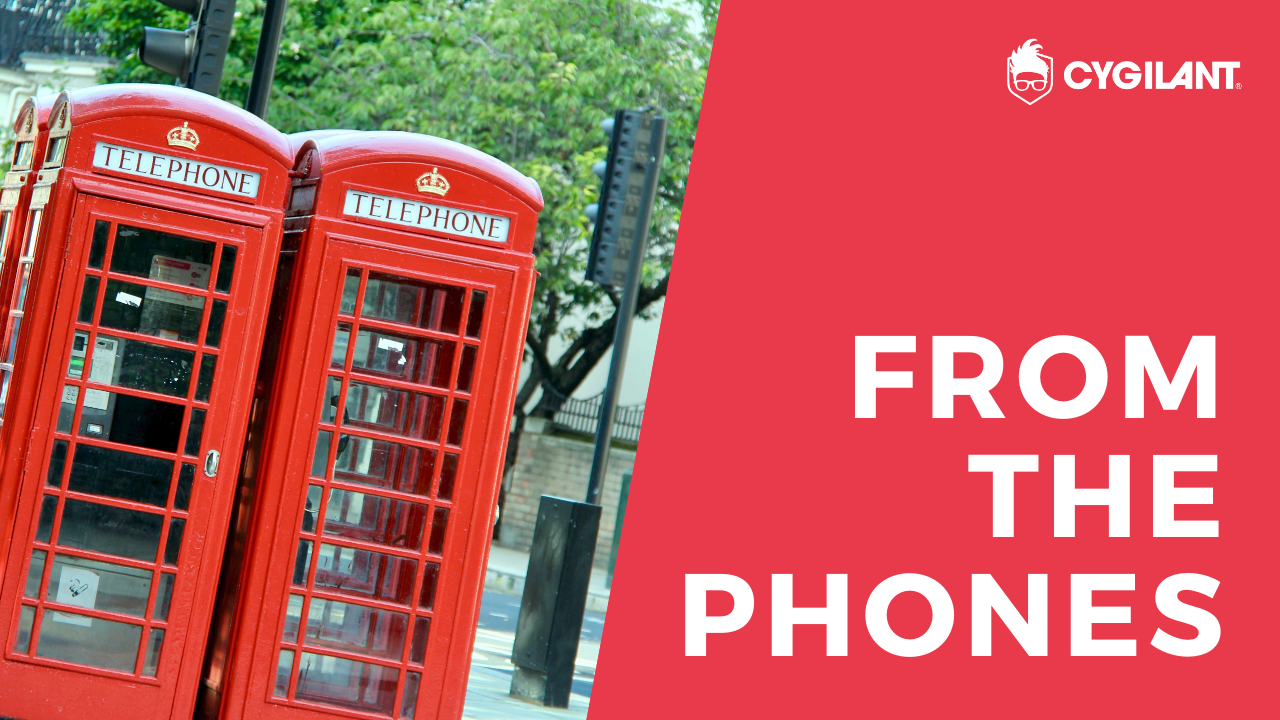 From The Phones: Cooper Mooney

Welcome to the second installment of our “From the Phones” blog series. This interview is with Cooper Mooney, account executive at Cygilant. Cooper spends his time speaking to many people challenged with cybersecurity.

Q: Thanks for joining me today, Cooper. You joined the Cygilant team in July 2018 and hit the ground running – and haven’t slowed down since then. Tell me a little about your background prior to Cygilant, as well as your role on the team.

A: I'm an account executive at Cygilant. I spend a lot of time speaking with companies about their cybersecurity challenges to get an understanding of what security processes they have in place today, and how Cygilant cybersecurity-as-a-service could help them.

Q: What would you say are the top cybersecurity concerns companies face?

A: I would say a lot of their concerns – outside of budgetary concerns – are related to lack of personnel resources. Most small and medium-sized businesses don’t have their own security team, and some don’t even have one person designated to handle their cybersecurity, yet they require an entire team dedicated to cybersecurity and runs 24/7. A lot of their headaches stem from having to deal with so many other responsibilities on their plate like some of the more day-to-day IT responsibilities, which have nothing to do with cybersecurity. So not having the firepower and full team they need for 24/7 cybersecurity is a really big concern for the majority of businesses. And even the companies that do have people in security roles feel that they’re not doing cybersecurity well – that they’re not getting the level of protection they need. I also hear a lot of concerns around difficulties hiring and the lack of qualified cybersecurity professionals available.

Q: What is a common myth you hear regarding cybersecurity for small and medium-sized businesses?

A: A common myth that I hear about cybersecurity for small and medium-sized businesses is the mentality: ‘They’re not going after me.’ The notion that an organization is safe because it doesn’t have anything valuable enough to make it worthy of being a target for hackers is completely false. Unfortunately, some people naively think that because their business is so much smaller than other large enterprises, like a global bank, it doesn’t have anything to make it worthy of an attack – when in reality, it’s oftentimes the smaller companies that are targeted by cybercriminals because they don’t have the same level of cybersecurity that that large organizations have.

Q: Is it true that hackers will often try to access a large enterprise’s data by attacking one of its third parties, which are typically smaller companies with less cybersecurity measures?

A: Absolutely – Hackers are smart, they know that most of the time it’s going to be easier for them to get access to mid-sized, third-party companies than it would be to go directly after the big guys.

Q: You joined Cygilant shortly after receiving your B.A. from Trinity College in Hartford, Conn. where you were captain of the baseball team. How did your experience as a student-athlete and co-captain help prepare you for the workforce and your role at Cygilant?

A: I would say it all comes down to time management, as well as work ethic. Being so heavily involved in both athletics and academics taught me how to manage a challenging workload, which included practices, games and road trips, finals, big papers, etc. The constant challenge of trying to succeed both on the field and in the classroom helped teach me how to balance a heavy workload, including being able to accurately determine where to devote the bulk of my time and what things could take a backseat but still maintain. The ability to prioritize my workload is definitely something that translate from college to the workforce.

I also think that baseball being an extremely mental sport helped prepare me for my career. And while baseball is a team sport, it also has a very individualized element to it in that my personal success directly impacted the team’s success. And that same dynamic of personal success helping drive team success applies to working in sales. My individual successes as an account executive coupled with the successes of other team members is ultimately, what determines the level of success the sales team achieves for Cygilant.

Q: What do you like most about working in the cybersecurity industry? What motivates you?

A: Cybersecurity is such a hot topic nowadays – it’s all in the headlines – and all over from a day-to-day standing you’re always reading about someone being hacked. And Cygilant is truly helping people solve problems...We’re not necessarily just a vendor selling technology. We combine people, process and technology to help resource constrained teams stay secure.